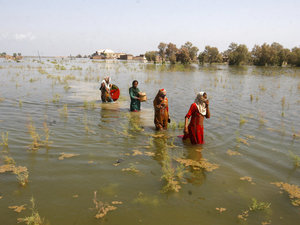 Planes carrying fresh supplies are surging across a humanitarian air bridge to flood-ravaged Pakistan as the death toll surged past 1,200, officials said Friday, with families and children at special risk of disease and homelessness.

The ninth flight from the United Arab Emirates and the first from Uzbekistan were the latest to land in Islamabad overnight as a military-backed rescue operation elsewhere in the country reached more of the 3 million people affected by the disaster. Multiple officials blamed the unusual monsoon and flooding on climate change, including U.N. Secretary-General Antonio Guterres, who earlier this week called on the world to stop "sleepwalking" through the deadly crisis.

Pakistan's Foreign Ministry said in a statement Friday that the planes brought food items, medicine and tents. Pakistan's Prime Minister Shahbaz Sharif had planned to travel to UAE on Saturday, but he postponed the trip to visit flood-hit areas at home.

So far, Pakistan has received aid from China, Saudi Arabia, Qatar, Turkey, Uzbekistan, U.A.E. and some other countries. This week, the United States also announced to provide $30 million worth of aid for the flood victims.

Asim Iftikhar, the spokesman at Foreign Ministry, said at a news briefing the previous day that the crisis has lent credibility to climate change warnings from scientists.

"This is not a conspiracy, this is a reality and we need to be mindful," he said.

According to initial government estimates, the devastation has caused $10 billion in damages.

Since 1959, Pakistan has emitted about 0.4% of heat-trapping carbon dioxide, compared to 21.5% by the United States and 16.4% by China, according to scientists and experts. Pakistani officials and experts say there's been a 400% increase in average rainfall in Pakistan's areas like Baluchistan and Sindh, which led to the extreme flooding.

Earlier this week, the United Nations and Pakistan jointly issued an appeal for $160 million in emergency funding to help the 3.3 million people affected by floods that have damaged over 1 million homes.

On Friday, authorities were warning people in the district of Dadu in the southern Sindh province to move to safer places ahead of floodwater from the swollen Indus river that's expected to hit the region this week.

In May, some parts of Sindh were the hottest place in Pakistan. Now people are facing floods there that have caused an outbreak of waterborne diseases. Although flood waters continued to recede in most of the country, many districts in Sindh remained underwater.

Farah Naureen, the director for Pakistan at the international aid agency Mercy Corps, told The Associated Press that around 73,000 women will be giving birth within the next month, and they needed skilled birth attendants, privacy, and birth facilities. Otherwise, she said, the survival of the mother and the newborn will be at risk.

According to the military, rescuers, backed by troops, resumed rescue and relief operations early Friday. Rescuers are mostly using boats, but helicopters are also flying to evacuate stranded people from remote flood-hit towns, villages and districts across Pakistan areas and deliver food to them.