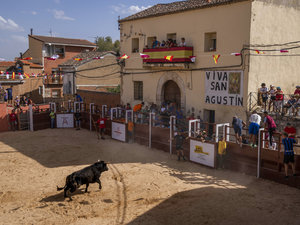 The shrieks of fear-infused excitement as bulls charge through the streets of many Spanish towns during wildly popular summer festivals echo in sharp contrast to the number of people who have died after being gored this year.

Bull runs may be a beloved spectacle for locals and visitors in thousands of summer festivals across Spain, but this year's macabre, record-tying toll of eight deaths has politicians and animal rights defenders heaping much criticism on the practice.

There were no fatalities or injuries in Atanzón when revelers on foot and on horseback recently ran with the rampaging animal. But last week in Alalpardo, less than an hour's drive away, a steer fatally gored a 60-year-old man.

A week earlier a 73-year-old French woman who was a regular in bull events died in the eastern town of Beniarbeig after being gored in the chest. Six men were fatally gored in other Valencia festivals and more than 380 participants have been injured. The season doesn't end until November.

Despite the concern, authorities appear at a loss as to what additional safety measures they can take.

"Some people have lost any fear of the bull," says regional emergency chief José María Angel. He urges revelers to be more cautious — the primary recommendation to come out a safety review meeting.

Valencia regional government Deputy President Aitana Mas has left the door open to debate whether to prohibit these kinds of fiestas, saying that the current legislation is "not enough."

Only a few villages have canceled such festivals. Tavernes de la Valldigna is one that has, and sees it as a matter of staying in step with its policy of defending animal rights.

"I hope our decision brings further into the streets the debate and leads to the end of this tradition," Mayor Sergi González told The Associated Press, even as he acknowledged the tradition's deep cultural roots.

While the public debate in Spain has largely focused on the loss of human lives, activists are demanding a total ban on events where animals are used for entertainment.

Animal rights groups are particularly opposed to events they say are deliberately more cruel to the animals, such as when cotton balls are lit on the horns of bulls or when the animal is forced into the sea and is then brought back to shore.

Events known in the Valencian dialect as "Bous al carrer," (Bulls on the street) involve bulls or calves released into the streets to waiting crowds who try to provoke them into charging.

Alejandro Cano, President of Defense of Bous al Carrer Associations doesn't see cause any for alarm, telling the AP that the casualties are "part of the festival."

Some bulls are fought and killed by matadors but most return to their farms.

According to the Culture Ministry, some 2,700 such spectacles were held last year. The amount was reduced compared to a regular season due to some pandemic restrictions still in place. In 2019, there were 17,000. This year around 9,000 are expected to take place until the end of November.

Pamplona's San Fermin running of the bulls, immortalized by Literature Nobel Prize winner and novelist Ernest Hemingway, is the prime event but there has not been a death there in 13 years. Safety measures, public investment and the professionalism of the runners are unmatched in any other smaller Spanish festival.

Atanzón will continue celebrating its patron saint, San Agustín, in the same fashion as Pamplona does — praying to the saint that no one is killed by the bulls for another summer.