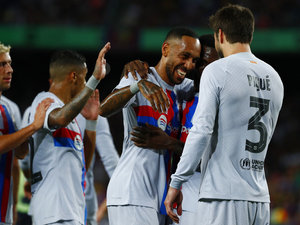 Barcelona was busy in the beginning of the transfer window trying to boost its squad and making some high-profile signings that included Robert Lewandowski and Raphinha.

Ahead of the transfer deadline, though, the focus was mainly on getting rid of players to clear up some extra salary cap room.

Barcelona worked to offload players such as Pierre-Emerick Aubameyang, Sergiño Dest and Martin Braithwaite on Thursday, allowing for the last-minute arrivals of defenders Héctor Bellerín from Arsenal and Marcos Alonso from Chelsea.

Dest reached a deal with AC Milan and Braithwaite with Espanyol, while Aubameyang was set to return to England to join Chelsea.

Barcelona had trouble registering its new signings because of the Spanish league's strict fair play regulations, and could only add new players by releasing others.

It had already let go Samuel Umtiti to Lecce, Nico González to Valencia, Neto to Bournemouth, Riqui Puig to the Los Angeles Galaxy and Óscar Mingueza to Celta Vigo.

Others who had been on the verge of leaving but were set to stay included midfielder Frenkie de Jong, defender Jordi Alba and forward Memphis Depay.

It was another quiet deadline day for Real Madrid, which had already lost Casemiro to Manchester United and added defender Antonio Rudiger and midfielder Aurélien Tchouaméni.

Isco Alarcón left for Sevilla at the end of his contract, while young Brazilian Reinier joined Girona on loan. Forward Borja Mayoral was sold to Getafe.

Atlético saw Álvaro Morata return this season from a two-year loan with Juventus and the striker quickly established himself as the team's regular starter in attack. There had been talks about Atlético looking to loan Morata again, but his good performances made the team decide to keep him.

Atlético brought in Sergio Reguilón from Tottenham at the end of the transfer window. It had previously added Nahuel Molina, Samuel Lino and veteran Belgium international Axel Witsel.

Atlético reportedly was trying to negotiate the transfer of some of its players as well, including Yannick Carrasco and Antoine Griezmann, who is in the second year of his two-year loan from Barcelona.

Real Betis, which also had struggled to register its new signings, was eventually able to add Willian José to the squad by restructuring the contracts of some of its players to meet the requirements of the league's financial fair play rules.