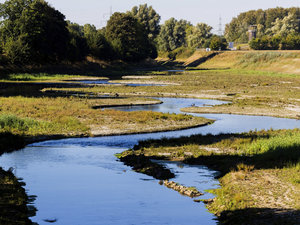 The stench is gone and, slowly, the fish are returning to the Emscher, a river through western Germany's industrial heartland that for decades was not just a blot on the landscape but officially deemed an open sewer.

German Chancellor Olaf Scholz celebrated the river's revival Thursday, hailing the 30-year effort to rewild the Emscher as an example of the perseverance that the country would also need in transforming its economy to a cleaner, greener future.

When the project began in the early 1990s, few could have imagined that the Emscher would ever be anything other than a "concrete sewage canal, an open cesspool, a stinking caricature of a river," Scholz said.

The Emscher runs through Germany's Ruhr region, which became a magnet for industry from the 19th century onward. Its coal pits fueled steel works and factories that turned Germany into an industrial powerhouse, but also caused widespread environmental destruction.

Since mining made the construction of large-scale sewage systems difficult, the Emscher was used for almost a century to transport the region's waste and effluent downstream, earning it the dubious honor of Germany's dirtiest river.

As part of a 5.5-billion euro ($5.5-billion) project, wastewater is now being channeled through an underground canal and the Emscher is officially sewage free.

Speaking at an event in the former mining town of Castrop-Rauxel, Scholz expressed delight at the progress achieved.

"There are actually fish swimming in the Emscher again," he said.