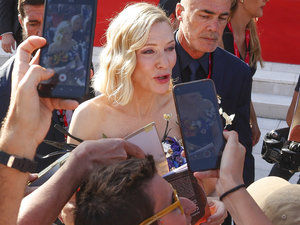 The film, which had its world premiere Thursday night in competition at the Venice International Film Festival, looks at an extraordinary artist at the peak of her career. The fictional Lydia Tár is a celebrated composer, musician, philanthropist and conductor, and the first ever woman to preside over an important German orchestra, who we meet as she's preparing to debut her autobiography "Tár on Tár" and complete the Mahler cycle with the orchestra.

"It's a very rare and special moment when Todd leaves the house and makes another movie," Blanchett said before the premiere.

"TÁR" is one of the most anticipated films of a festival full of major filmmakers. It's Field's first film in over 15 years and features what is already being hailed as a bravura performance from one of cinema's most celebrated actors.

It's also a film that has been a bit secretive — there is no real easy logline to describe "TÁR" or even tease what happens, but it's one that reveals itself to you as you go along. Blanchett described it as a process movie about someone who is estranged from herself.

"She's haunted by something, by her past, by herself, by past deeds," Blanchett said. "You experience someone who has put her past in a box and who through her immense talent has tried to reinvent herself and be saved and changed and transmogrified by the music."

And there's not even one definitive reading, at least according to Field.

"I see a different film every time I watch it and I've watched it many times," he said.

But, in his words, Lydia has external forces going on which we have limited knowledge about what they are or what they mean. Then something happens and everything changes.

"It's a very long journey in a very short period of time for her," said Field.

To play Lydia's wife, Sharon, who is violinist in the German Orchestra, Field said he and Blanchett "like a jinx" both said "Nina Hoss" at the same time. Blanchett laughed that she'd been stalking the German actor known for her frequent collaboration with Christian Petzold "for about 10 years now."

"It's unhealthy but it's true," she said.

Blanchett has played LGBTQ characters before, perhaps most notably in Todd Haynes' "Carol," but the importance of that kind of representation on screen is not something she takes into consideration when choosing roles.

"I think it's important on a societal level," Blanchett said. "Homogeneity in any art form is death. But I'm wary of putting up the word importance with the word art. I don't see the artistic process as an educational tool. "

"I don't think about the character's gender nor her sexuality," Blanchett continued. "And I love that about the film. It just is. It's a human portrait. I think we have matured enough as a species that we can watch a film like this and not make it the headline or the issue."

With "Carol," she said she only realized after the fact that it was unique in its portrayal of women in a relationship and that it did become important to people.

"TÁR," just felt "urgent and undeniable" and while there are "a lot of explosive things in the film," she's also not interested in "agitprop," she said.

"After the thing is made, it can be politicized, disseminated, discussed, people can be disgusted with it, offended by it, inspired by it," she said. "But that is outside our control."

"TÁR" is competing for the festival's Golden Lion award, to be given out on Sept. 10 by a jury led by Julianne Moore. And it's expected to be a major contender come Oscar season. Focus Features is releasing the film in theaters in North America on Oct. 7.

"She is a master supreme," he wrote in his director's statement. "Even so, while we were making the picture, the superhuman-skill and verisimilitude of Cate was something truly astounding to behold. She raised all boats. The privilege of collaborating with an artist of this caliber is something impossible to adequately describe."