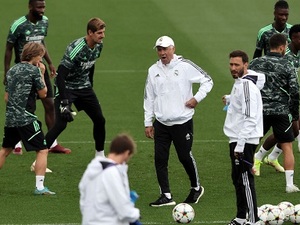 Eden Hazard has also "done his part of the job", Ancelotti said on the eve of holders Real's Champions League home game against Leipzig on Wednesday, their second Group F match after a 3-0 win over Celtic.

"We are enthusiastic about our attack, about our young people. Karim makes us dream, but you end up getting used to what he does. So, when a young player comes on, it makes you dream even more," said Ancelotti.

"What Vini and Rodrygo do make us dream."

Ancelotti said Benzema, carrying a right thigh injury, "has a chance of playing" in the La Liga derby against Atletico on Sunday.

But against Leipzig, the 34-year-old French player will have to give way to the Brazilians or 31-year-old Belgian Hazard.

"During the two matches without Karim, Hazard did what we asked of him," said Ancelotti, who has won the Champions League trophy a record four times as a coach.

"But above all, the team reacted well, because we scored seven goals," he added of the three against Celtic and four against Mallorca.

In Benzema's absence, the player who shone the most was 22-year-old Vinicius, who was the scorer of the winning goal in last year's Champions League final against Liverpool.

"I don't even need to talk about his qualities," said Real's German rookie Antonio Rudiger of the Brazilian.

"He's a huge player, everyone knows that. He's a calm boy in the dressing room, who likes to have fun on the pitch.

"He dribbles a lot, and it's normal that the opponents want to hurt him when they have the chance. I too have tried... We all try to stop him."

Against Leipzig, Ancelotti expects a "very dangerous attack, with not only (Timo) Werner, but also (Christopher) Nkunku, who has been playing very well since last season, (Dominik) Szoboszlai, who has different characteristics, (Emil) Forsberg, who has a lot of experience... They are a very dangerous team".

Meanwhile, after two financial years impacted by the Covid-19 pandemic, Real Madrid have returned to growth, with revenues of 721.5 million euros ($723 million) at the end of the 2021-2022 season, the club announced.

The Madrid club's revenues had reached a record 757 million euros in 2019, before the outbreak of the pandemic, but fell to 653 million euros last season, due in particular to the loss of ticketing revenue.