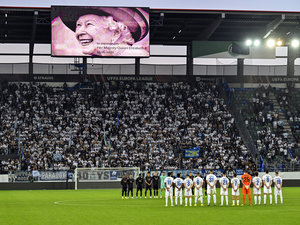 Arsenal's postponed Europa League game against PSV Eindhoven has been rescheduled for next month after the Premier League agreed to push back the London club's midweek match against Manchester City.

UEFA said the Arsenal-PSV game will be played on Oct. 20 after being postponed from Thursday because police did not have resources in London during preparations for the state funeral of Queen Elizabeth II.

Arsenal was due to host Man City on Oct. 19 in a clash of the current top two teams in the Premier League standings.

The Premier League said no new date was yet agreed for the Arsenal-Man City game. The season is already congested because of the World Cup in Qatar being played from Nov. 20 to Dec. 18.

"UEFA would like to thank the Premier League and the clubs concerned for their flexibility and cooperation," the European soccer body said.

UEFA wanted the Europa League program completed on schedule by Nov. 3 ahead of the draw for the round of 16 four days later. Arsenal had no clear midweeks available ahead of the World Cup.

Though policing in London has allowed Chelsea's Champions League game against Salzburg to go ahead Wednesday, the visit of a large group of PSV fans traveling from the Netherlands was more challenging. Chelsea's home league game against Liverpool on Sunday was also postponed.