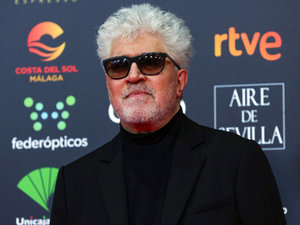 Oscar-winning director Pedro Almodóvar says that he is withdrawing from his first English-language feature, "A Manual for Cleaning Women" produced by and starring Cate Blanchett.

Almodóvar, 72, told entertainment news website Deadline Hollywood that he was unable to handle the commitment.

"It has been a very painful decision for me," Almodóvar told Deadline Hollywood. "I have dreamt of working with Cate for such a long time. Dirty Films has been so generous with me this whole time and I was blinded by excitement, but unfortunately, I no longer feel able to fully realize this film."

A new director hasn't been announced yet by Blanchett's Dirty Films production company.

Almodóvar's brother and business partner confirmed the decision in a social media post on Wednesday.

"Pedro Almodóvar is leaving the 'A Manual for Cleaning Women' project, which will continue forward with Cate Blanchett," Agustin Almodóvar, who helps his sibling run their El Deseo production company, wrote on Twitter

"A Manual for Cleaning Women" is an adaptation of the eponymous collection of short stories by American author Lucia Berlin.

Pedro Almodóvar won Oscar awards for best foreign language film for "All About My Mother" (1999) and for best original screenplay for "Talk To Her" (2002). He made his first short in English, "The Human Voice," featuring Tilda Swinton, in 2020.