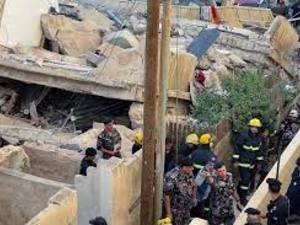 Three bodies were pulled from the rubble of a building in Jordan's capital on Friday three days after it collapsed, authorities said, bringing the overall toll to 13 dead.

A massive rescue operation has been mounted since the four-story residential building toppled over on Tuesday in Jabal al-Weibdeh, one of Amman's oldest neighborhoods.

"Rescue teams were able to extract three more bodies on Friday; the death toll now stands at 13," the country's public security directorate said in a statement, adding that the "search is continuing."

A one-year old girl was among the dead, along with a woman and a young man, according to an AFP correspondent at the scene.

The body of at least one more person, a woman, is believed to still be buried under the rubble.

On Thursday, emergency workers safely rescued a four-month-old girl from the wreckage, having sustained only minor bruises.

Jordan's public prosecutor has ordered the arrest of three people as part of the investigation, including the building manager as well as two other people involved in renovation work, state media said.

The site of the tragedy is in the capital's central Jabal al-Weibdeh district, known for its vibrant cultural life and home to a large number of expatriates.