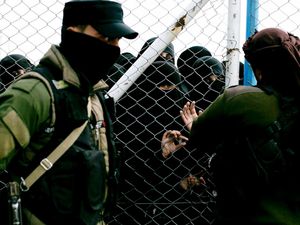 U.S.-backed Syrian fighters said they have concluded a 24-day sweep at a sprawling camp in northeast Syria housing tens of thousands of women and children linked to the Islamic State group.

IS sleeper cells preparing a new generation of militants -- boys and girls being fed extremist ideology to eventually try and set up a second so-called Islamic State caliphate -- were also uncovered, the statement by the Internal Security Forces said. It added that the operation was assisted by the U.S.-backed Kurdish-led Syrian Democratic Forces as well as members of the U.S.-led coalition.

The operation at al-Hol in the northeastern province of Hassakeh also led to the release of two Yazidi girls taken from Iraq as sex slaves years ago and four non-Yazidi women, who had been chained and subjected to torture.

"The operation was launched following the increasing crimes of killing and torture committed by ISIS cells against the camp residents," said the statement from the U.S.-backed forces, using another acronym for the Islamic State group. It added that since the beginning of the year, the extremists have killed 44 camp residents and humanitarian workers.

The statement also said that 226 people, including 36 women, were detained in al-Hol -- widely seen as a breeding ground for the IS.

Some 50,000 Syrians and Iraqis are crowded into tents in the fenced-in camp. Nearly 20,000 of them are children; most of the rest are women, wives and widows of IS fighters.

In a separate, heavily guarded section of the camp known as the annex are an additional 2,000 women from 57 other countries - they are considered the most die-hard IS supporters - along with their children, numbering about 8,000.

"ISIS has depended mainly on women and children, as real resources related directly to the ISIS leaders, to maintain the ISIS extremist ideology and spread it in the camp," the statement said.

The camp was initially used to house the families of IS fighters in late 2018 as U.S.-backed Kurdish-led forces recaptured territory in eastern Syria from the militants. In March 2019, they seized the last IS-held villages, ending the "caliphate" that the group had declared over large parts of Iraq and Syria in 2014.

The United States and other nations have struggled to repatriate the families, but have had only very limited success.

The US is once again arming terrorists, just like they did before in the middle and with the two ukranian nazi militias.