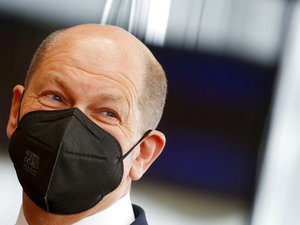 Scholz, whose two-day trip next weekend will also take him to Qatar and the United Arab Emirates, becomes the latest Western leader to meet with the crown prince.

Bin Salman was until recently regarded as a pariah in the West due to his suspected role in the murder of Washington Post journalist Jamal Khashoggi in 2018.

But he is being courted again as Europe and its allies urgently seek fresh sources of fossil fuels after Russia cut gas supplies amid soaring tensions over its invasion of Ukraine.

Scholz, accompanied by a business delegation, will visit Saudi Arabia on Saturday, where he will meet with the crown prince and -- if his health permits it -- King Salman, government spokesman Steffen Hebestreit said.

He did not go into detail about the reasons for Scholz's Gulf visit but said he would be "very surprised" if the topic of energy was not discussed.

The spokesman also offered assurances that "the murder of Mr Khashoggi will certainly figure in discussions."

It is the latest sign of bin Salman's international rehabilitation -- in July, French President Emmanuel Macron held talks with him in Paris, and US President Joe Biden visited the kingdom.

In the afternoon, the chancellor will hold talks with Qatari Emir Sheikh Tamim bin Hamad Al-Thani.

Habeck already visited Qatar and the UAE in March in an effort to find alternatives to Russian gas, which Germany has traditionally depended on heavily.

Russia's decision to cut off supplies has triggered an energy crisis in Europe, with consumers and businesses facing soaring bills as winter approaches.