Markets struggle ahead of another Fed rate hike 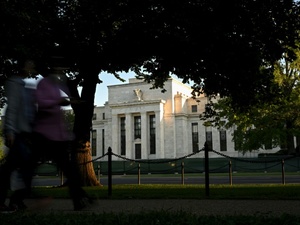 Stock markets dropped again Monday, extending last week's rout as investors brace for another big rate hike by the U.S. Federal Reserve that they fear could drag down the global economy.

The Paris CAC 40 and Frankfurt DAX were down in afternoon trading while Asian indices mostly closed lower. London was closed for the funeral of Queen Elizabeth II.

"Traders are worried that they are going to hear more hawkish stance from central banks this week" which would "cut economic activity further," AvaTrade analyst Naeem Aslam told AFP.

The Fed will announce its latest monetary policy decision on Wednesday as it seeks to tame decades-high inflation.

With recent data showing U.S. inflation rooted at four-decade highs, investors are increasingly pessimistic about the outlook for the global economy.

Disappointing US inflation figures last week unnerved traders and ramped up bets for a third successive 0.75-percentage-point rise, while some have predicted a whole percentage point move.

Policymakers, including Fed chairman Jerome Powell, have repeatedly said their ultimate aim is to bring inflation under control, even if that means sending the economy into recession.

Patrick O'Hare at Briefing.com said that a good question is why stock markets are still falling when they already took a wallop last week on the prospect of higher interest rates triggering an economic slump.

The Bank of England and its peer in Japan are also holding key meetings this week, with the pound and the yen feeling the pressure from a strong dollar.

Hong Kong closed down one percent, even after reports that the city's government was considering ending mandatory hotel quarantine for incoming travelers.

Shanghai was also down despite news that megacity Chengdu was ending a two-week Covid-19 lockdown that saw 21 million people affected.

Tokyo was closed for a holiday.

The prospect of more big Fed rate hikes is also keeping the dollar at multi-decade highs against its major peers, with the yen feeling most of the pressure as the Bank of Japan refuses to tighten policy.

The Japanese unit last week hit a fresh 24-year low of 144.99 to the dollar, though it has bounced slightly after comments from BoJ officials that signaled they were ready to intervene to provide support.

Oil prices tumbled around three percent despite the news out of Chengdu as demand fears are fuelled by the growing fear of recession around the world.

"The market's growth concerns, meanwhile, are being fed by the inverted yield curve and are manifesting themselves in the commodities market," O'Hare said.