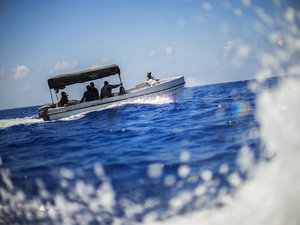 Cyprus has assisted in rescue of a small wooden boat crammed with more than 300 migrants that was floating adrift 203 kilometers west of the island nation, a Cypriot official said Tuesday.

A helicopter and three naval and police patrol vessels were scrambled to offer assistance to the boat that Charalambides said had departed from Lebanon three days ago and was trying to reach Italy with many women and children aboard.

Authorities couldn't immediately determine the nationality of the migrants aboard the boat but there was no indication that any had experienced any health issues, Charalambides said. All the migrants were safely transferred aboard the Marshall Islands-flagged cargo ship Paolo Topic which was in the vicinity.

Charalambides said authorities had asked the captain of the 250-meter (820-foot) Paolo Topic to set sail for the Cypriot port of Limassol so that the migrants could disembark. But he said the captain opted, under the directions of the company that owns the ship, to head to his original destination of Istanbul.

In a separate rescue mission Tuesday, JRCC spokesman Andreas Zachariou said two patrol boats intercepted a boat with 177 migrants aboard about 56 kilometers off the southern coastal town of Larnaca. The boat, which included 67 women and children, had departed from Lebanon.

Zachariou said all the migrants are in good health and are in the process of being transferred to a migrants' reception facility on the island.

Once a country that received refugees, Lebanon has become a launching pad for dangerous migration by sea to Europe. As the country's economic crisis deepened, more Lebanese, as well as Syrian and Palestinian refugees have set off to sea, with security agencies reporting foiled migration attempts almost weekly.