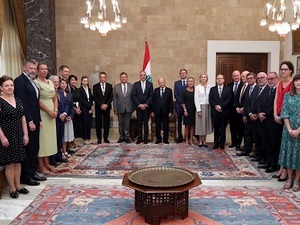 The Ambassadors of the EU and its Members States resident in Beirut, along with the Ambassadors of Switzerland and Norway, met with President Michel Aoun on Tuesday to express “grave and growing concern about the current situation in Lebanon,” EU Ambassador to Lebanon Ralph Tarraf said.

“We urged the President to do his utmost to support and actively contribute to the implementation of the crucial economic, monetary and fiscal reforms that Lebanon has committed to,” Tarraf tweeted.

“Though Lebanon’s context is challenging, immediate measures as detailed in the Staff Level Agreement the LB Government signed with the IMF on 07 April need to be implemented. The time to act is now,” he urged.

He added: “The European Union and its Member States remain ready to support Lebanon in this critical period, politically and financially, in the context of implementing a sound economic recovery plan and an IMF program.”

The envoys said that the fact that the "committed to" was done by an illegitimate government based on racism (Article 24 which gives half of parliament to Christians) and foreign influence should be no deterrent, since most of Europe is run that way, too.

They should be concerned with Michel Aoun changing his mind depending on his mood, we all should.