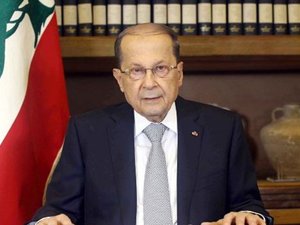 President Michel Aoun is still insisting on “his right to name the Druze and Sunni ministers who will replace Minister of the Displaced Issam Sharafeddine and Economy Minister Amin Salam,” al-Akhbar newspaper reported on Tuesday.

“This may reflect a difficulty that is still obstructing the announcement of the formation of a new government,” the daily added.

“The past two days did not carry anything new as to the naming, at a time the name of ex-minister Saleh al-Gharib moved to the backburner, seeing as it is not appropriate to name a figure who would provoke Progressive Socialist Party leader Walid Jumblat,” al-Akhbar quoted informed sources as saying.

Al-Joumhouria newspaper meanwhile reported that Hezbollah has strongly intervened to mediate between Baabda and the Grand Serail and that Hezbollah secretary-general’s political aide Hussein al-Khalil has met with PM-designate Najib Mikati to “stress the need to form a new government no matter what it takes.”

“Hezbollah also communicated with President Aoun in a bid to ease his stance,” the daily added.

Official political sources directly concerned with the governmental file also told al-Joumhouria that Paris has also intervened through its ambassador to Lebanon Anne Grillo, who “has relayed an urgent request to Lebanese leaders on the necessity to form a government in an urgent manner.”

What an odd thing to ask for. When he was the leader of the FPM he insisted that the president has no right to name ministers and that his block with the largest Christian representation he had the right to name most Christian ministers. Now as president himself he wants a further government share even thought he already has ministers to his name, and furthermore he thinks he has the right to name Druze and Sunni ministers even though his support within these two communities goes from nonexistent to downright hostile.

The Titanic hit the iceberg a long time ago, the engine room is on fire and it’s sinking at an alarming rate, the captain - pardon, the general - Michel Aoun wants to pick two musicians for the orchestra that will play the music for the least fortunate citizens, most of them are on the lower decks. The sad thing is that usually a captain is the last one allowed to jump ship, but since Lebanon is so lucky, he’ll be one of the first to leave with whatever he managed to steal in the cabins whilst others were looking for a way out.