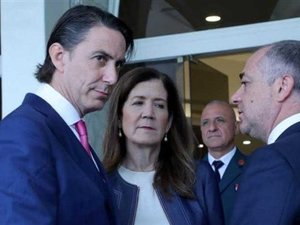 Israeli business news website Globes meanwhile quoted a source familiar with the negotiations as saying that there is “hope is to finalize the agreement within two weeks, but a few contentious items are delaying the process.”

“One is the starting point of the maritime border on the shore at Rosh Hanikra/Naqoura. Another relates to islands belonging to Israel that change the line of the border. A third is over the distance that Israeli defense officials are demanding between Energean’s Israeli production platforms and the platform due to operate in Lebanon’s economic waters,” the source added.

Lebanon’s al-Akhbar newspaper, which is close to Hezbollah, meanwhile reported that “the process of drafting the agreement has started.”

It added that the draft agreement contains “an Israeli acknowledgement -- with U.S., French and U.N. guarantees – that Lebanon has the exclusive economic rights in the entire area north of Line 23, and that it has the rights to the reservoir of the Qana field, even if it stretches into the Palestinian territory, in addition to a pledge that global firms, especially France’s TotalEnergies, would launch the broadest possible exploration process, not only in the border blocks but also in the rest of the Lebanese blocks, according to a mechanism whose details would be agreed with the Lebanese government.”

“The agreement will also include measures by a neutral side to prevent friction on the two sides of the maritime border, in a way that would facilitate the exploration and extraction operations of the companies, according to a mechanism that would organize civilian and military activities in the sensitive areas,” al-Akhbar said.

The Nidaa al-Watan newspaper meanwhile reported that Lebanon’s leaders and the U.S. mediator have started contacts aimed at agreeing on “the date of a decisive negotiations meeting in Naqoura in which the final texts would be formulated in order to be signed.”

Talks, talks and more talks. Nothing will happen for one simple reason. Hizballah will not agree to anything which is less than its own maximist demands, and the Lebanese Armed Forces can do nothing about it.