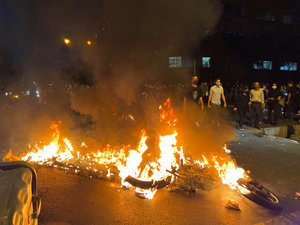 Three people have been killed during protests in Iran's Kurdistan province over the death of a young woman after she was arrested by "morality police," the region's governor said Tuesday.

"The three were killed suspiciously" as part of "a plot by the enemy," the governor, Ismail Zarei Koosha, was quoted as saying by Fars news agency, without specifying when the fatalities occurred.

The CIA is down to its last few tricks in its bag of out-dated tricks.

really? CIA? you must have a network of spies all over the world. and strop plagiarizing!

Did the CIA kill the woman, kill the three protestors, cause the protests or are the morality police, please clarify.

Chrisrushlau, the cia didn’t torture and kill that poor woman at the police station. Not all Iranians are fan of the religious police and khamaney (as they often refer to him as the evil uncle); the cia does destabilise countries, sure thing but not this time. The Iranian people deserve the credit!