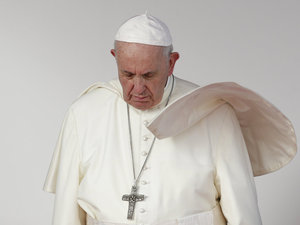 Pope Francis on Wednesday condemned the "monstrosities, the tortured bodies" found in war-torn Ukraine, in prayers after his weekly audience.

The 86-year-old said he had spoken to Catholic Cardinal Konrad Krajewski, who is on his fourth humanitarian and pastoral mission to the country, about the "terrible situation in tormented Ukraine."

"He told me about the pain of those people, the savagery, the monstrosity, the tortured bodies they are discovering," Pope Francis said.

During his visit to Ukraine, Polish cardinal Krajewski prayed before the mass graves discovered outside the formerly Russian-occupied city of Izyum, according to Vatican News.

"One is dumbfounded by such horror," he told the website, the Vatican's official media outlet.