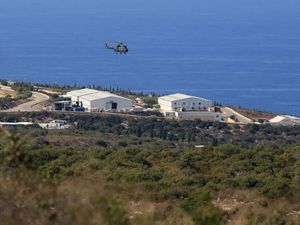 The indirect sea border demarcation negotiations between Lebanon and Israel have been completed and U.S. mediator Amos Hochstein will present a draft agreement within days, al-Akhbar newspaper reported on Wednesday.

“The United States is pressing for an agreement to be reached before the end of the month,” the daily added.

Noting that Hochstein will present his draft before the end of the week, al-Akhbar said the agreement might involve resorting to the U.N. Security Council to introduce amendments to the role of U.N. Interim Force in Lebanon (UNIFIL) so that it include “a disputed area that is now known as a security zone inside Lebanon’s territorial waters.”

Several sources concerned with the file meanwhile said that “the U.S. is very serious in this regard and is seeking to finalize the file as soon as possible, for reasons related to it and to what’s happening in the region and the world in the gas and oil file, and certainly not because of the Lebanese interest, which has coincided with the U.S. need to demarcate the border.”