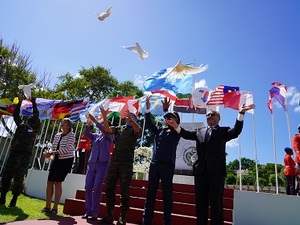 The United Nations Interim Force in Lebanon (UNIFIL) held on Wednesday a ceremony to commemorate the International Day of Peace at its headquarters in Naqoura, South Lebanon.

Peacekeepers representing UNIFIL’s current 48 troop-contributing countries were joined at the event by representatives of the local authorities, religious leaders, Lebanese armed and security forces and members of the international community.

UNIFIL’s Head of Mission and Force Commander, Major General Aroldo Lázaro, reviewed an Honor Guard and, together with Brigadier General Roger Helou representing the Lebanese Armed Forces (LAF), laid wreaths at the cenotaph in memory of the over 300 UNIFIL peacekeepers who have lost their lives in the line of duty in South Lebanon since 1978.

Maj. Gen. Lázaro noted that “along the Blue Line, we have seen relative stability, not peace. But thanks to the commitment of the parties and to the effectiveness of UNIFIL’s liaison and coordination mechanisms, so far, that stability has held.”

The UNIFIL Force Commander confirmed the mission’s “commitment to peace and security in south Lebanon” and stressed the “importance of the partnership with the Lebanese Armed Forces in implementing Security Council Resolution 1701,” a UNIFIL statement said.

However, Maj. Gen. Lázaro was cognizant of the challenges ahead. “Peace is not something that we, international peacekeepers, can achieve alone. We rely on our strong relationships with the communities who host and welcome us, who greet us every day as we perform our daily activities, and with whom we may share a coffee or a meal to discuss their needs and concerns,” he added.

During the ceremony, military staff officers were awarded with the U.N. Peacekeeping Medal in recognition for their participation in UNIFIL, and as is customary, white doves were released at UNIFIL’s cenotaph to symbolize peace.

The International Day of Peace was established by the U.N. General Assembly in 1981. It is dedicated to cease-fire and non-violence and is an occasion during which all promote tolerance, justice and human rights. Each year on this day, the United Nations invites all nations and people to honor a cessation of hostilities and to commemorate the day through activities that promote peace.