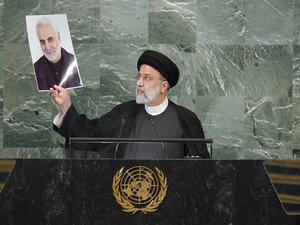 Iran's president told the United Nations on Wednesday that his country was not seeking an atomic weapon and demanded US guarantees it would abide by any revived nuclear deal.

"The Islamic Republic of Iran is not seeking to build or obtain nuclear weapons and such weapons have no place in our doctrine," President Ebrahim Raisi told the U.N. General Assembly.