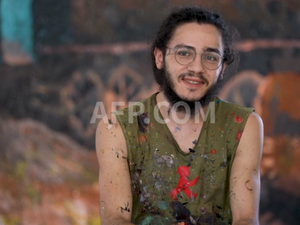 Lebanese fine arts student Ali Merhi is finishing his degree as his country endures its worst-ever economic crisis, with unemployment around 30 percent, the local currency in free fall, and faltering electricity and water supplies.

"Life is tough for young Lebanese people… Most are thinking about leaving,” says Merhi, covered head-to-toe in paint.

Mired in one of the modern world's worst-ever economic crises, Lebanon has seen its currency lose more than 90 percent of its value against the dollar since 2019. State services have all but collapsed and the unemployment rate has nearly tripled to 30 percent.

The water has been cut off at Ali’s flat for two weeks and the electricity rarely comes.

Fed up with the crumbling state, he splatters paint across wall-sized works depicting government failures -- Lebanon’s now defunct railway system, its garbage collection crisis, and a ship that carried ammonium nitrate into Beirut’s port that eventually caused a deadly 2020 explosion.

"We’re supposed to be living our lives, but instead we're spending our time looking for the most basic necessities of life,” says Merhi.

“You unleash the anger within you into the painting,” he tells AFP. “If we're not able to make a real revolution… we need to find another space in which to work.”