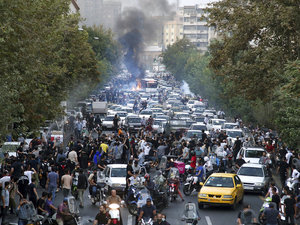 At least 31 civilians have been killed in an Iranian security forces crackdown on protests that erupted over the death of Mahsa Amini after her arrest by the morality police, an Oslo-based NGO said Thursday.

"The people of Iran have come to the streets to achieve their fundamental rights and human dignity... and the government is responding to their peaceful protest with bullets," Iran Human Rights (IHR) director Mahmood Amiry-Moghaddam said in a statement, publishing a toll after six days of protests.

IHR said it had confirmed protests taking place in over 30 cities and other urban centers, raising alarm over "mass arrests" of protesters and civil society activists.

Protests first erupted over the weekend in the northern province of Kurdistan, from where Amini originated, but have now spread across the country.

IHR said its toll included the deaths of 11 people killed Wednesday night in the town of Amol in the northern Mazandaran province on the Caspian Sea, and six killed in Babol in the same province.

Meanwhile, the major northeastern city of Tabriz saw its first death in the protests, IHR said.

"Condemnation and expression of concern by the international community are no longer enough," Amiry-Moghaddam said.

Earlier, Kurdish rights group Hengaw said 15 people had been killed in Kurdistan province and other Kurdish-populated areas of the north of Iran, including eight on Wednesday night.

The authorities cut the internet and most Facebook owned apps, somehow they believe word of mouth is no longer relevant in revolutions?

Lebanon desperately needs Cedar Revolution II as Iran needs Green Revolution II. Time is ripe for both, hopefully a grass-root peaceful demonstration away from politicians and black shirts. A million plus PEACEFUL demonstration is key for success. For Lebanon, simple slogan: No arms outside army and UN Charter neutrality. For Iran's democracy pure and simple. Cedar Revolution and Green Revolution are twin in principle. May it is the right time for serious coordination to implement lessons learned and plan for success. There are no greater paper tiger than the Basij, whereas in Iran or Lebanon. Unless we are stupid we surely should win!