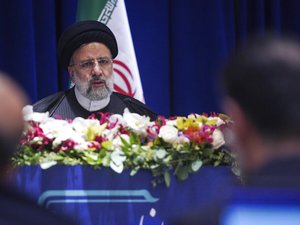 The death of an Iranian woman in the custody of the country's morality police must be "steadfastly" investigated, Iran's president said, even as he turned the tables on the country he was visiting for the U.N. General Assembly and asked: What about all the people killed by American police?

"Did all these deaths get investigated?" Ebrahim Raisi said at a news conference held in New York on the sidelines of the annual meeting of the world's leaders. He lamented what he said were "double standards" in the West with regards to human rights.

Of Mahsa Amini's death, which has produced clashes between protesters and security forces in Iran, he said authorities were doing what they needed to do.

"It must certainly be investigated," he said. "I contacted her family at the very first opportunity and I assured them we would continue steadfastly to investigate that incident. ... Our utmost preoccupation is the safeguarding of the rights of every citizen."

Clashes between Iranian security forces and protesters angry over the death have killed at least nine people since the violence erupted over the weekend, according to a tally Thursday by The Associated Press. Iranian police say Amini, detained for violating the morality police's strict dress code, died of a heart attack and was not mistreated. Her family has cast doubt on that account.

The scope of Iran's ongoing unrest, the worst in several years, still remains unclear as protesters in more than a dozen cities — venting anger over social repression and the country's mounting crises — continue to encounter security and paramilitary forces.

Raisi, who addressed the General Assembly formally on Wednesday, pointed out that bad things happen to people at the hands of authorities everywhere.

"What about the death of Americans at the hands of U.S. law enforcement?" he asked about his country's rival nation, also mentioning deaths of women in Britain that he said were not investigated. He called for the "same standard" around the world in dealing with such deaths at the hands of authorities.

Raisi's comparison reflects a common approach by Iranian leaders, who when confronted with accusations of rights violations often point to Western society and its "hegemony" and demand that those nations similarly be held accountable. Neither the United States nor Britain, however, has morality police vested with authority over citizens.

Raisi, who led the country's judiciary before becoming president, said the inquiry into Amini's death ultimately rests there. While elections and open debate take place in Iran, the top echelons of government hew closely to the supreme leader, who has final say on key state matters and appoints the head of the judiciary.

The protests have grown in the last five days into an open challenge to the government, with women removing and burning their state-mandated headscarves in the streets and Iranians calling for the downfall of the Islamic Republic itself. They are the most serious demonstrations since 2019, when protests erupted over a government hike in the price of gasoline.

While not outright condemning the protests, he appeared to side with the lethal response to that has left some protesters dead.

"What is occurring, having demonstrations … of course these are normal and fully accepted," he said. "We must differentiate between demonstrators and vandalism. Demonstrations are good for expressing specific issues."

He added: "There is debate in Iran."

The demonstrations in Iran began as an emotional outpouring over the death of Amini, whose death has been condemned by the United States, the European Union and the United Nations.

The U.S. government imposed sanctions on the morality police and leaders of other Iranian security agencies, saying they "routinely employ violence to suppress peaceful protesters."

Iranian police say Amini died of a heart attack and was not mistreated, but her family has cast doubt on that account. Independent experts affiliated with the U.N. said Thursday that reports suggested she was severely beaten by the morality police, without offering evidence.