Mikati hopes to finalize govt. formation with Aoun next week 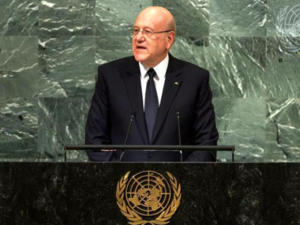 Prime Minister-designate Najib Mikati has expressed hope to finalize the cabinet formation file in the meetings that he will hold with President Michel Aoun next week, adding that the issue “does not need a lot of discussions.”

Speaking to MTV from New York, where he took part in the works of the U.N. General Assembly and met with several leaders, Mikati said the issues of the presidential vote, the aspired agreement with the International Monetary Fund and sea border demarcation with Israel were the focus of his talks there.

“The issue is certainly in an advanced stage but we must wait for the conclusions. There are some final steps for which we are expecting some answers, which should be formal so that we can act accordingly,” Mikati added.

As for the issue of Iranian fuel oil, Mikati said “Iran has announced donating 600,000 tons, but there is a minor problem related to specifications that is being addressed.”

“It is a free, unconditional donation, and if the obstacles are resolved we will welcome it, because we need this support,” the premier added.