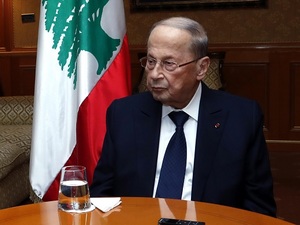 President Michel Aoun on Friday expressed his relief over “the tripartite statement that was issued yesterday by France, the U.S. and the Kingdom of Saudi Arabia regarding the situation in Lebanon.”

He also stressed “the need to elect a new president within the constitutional timeframe in addition to forming a new government that would win parliament’s confidence prior to the expiry of the presidential term on October 31.”

Moreover, the president reiterated the need to “implement the reforms that have been agreed on with the International Monetary Fund and to remove all obstacles that are still preventing this.”

Word of the day: