Bassil says not running for president for now, govt. will be formed 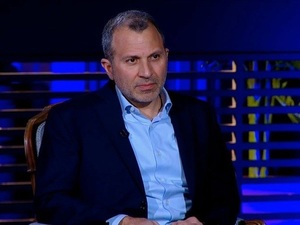 Free Patriotic Movement chief Jebran Bassil has noted that he is not a presidential candidate as he reassured that a new government will be formed.

“I won’t become a candidate except after I declare my candidacy, which I haven’t done until now,” Bassil said, in a video interview with Annahar newspaper.

He also reiterated that he will not endorse the nomination of Marada Movement chief Suleiman Franjieh.

Hezbollah chief “Sayyed (Hassan) Nasrallah knows that he cannot persuade me with something I’m not convinced of,” Bassil added.

He also rejected to back the possible nominations of MPs Neemat Frem and Michel Mouawad. “Ethics are everything,” Bassil added, noting that the election of Army chief General Joseph Aoun would require a constitutional amendment.

Asked if he might ever vote for Lebanese Forces leader Samir Geagea for presidency, Bassil said: “I won’t vote for him and I don’t see him improving with time but rather worsening. Ever since he was jailed until now I have not witnessed a person who has learned or drawn lessons.”

As for the sea border negotiations with Israel, Bassil said: “We have finalized the demarcation agreement regardless of the timing, which I expect to take place prior to the Israeli elections.”

“Hezbollah is more than ready for a war that it does not want,” Bassil warned.

As for the governmental file, the FPM chief said “the government will be formed because no one wants to go into the unknown.”

This guy lies even worst than Jimmy Carter.

So basically what he just said is he dismissed all his rivals for the Presidency. It's either him or one he picks who he controls and have yet another defect shadow President.

I wish some one would read this and not sure how poplar it would be. I mentioned this before.

Round 1: All candidates eleigible for the Presidency enter. Only Christians vote (since we are a sectarian country). The top 2 vote getters percentage wise goes to final Round 2.

Round 2: All citizens regardless of sect and parties get to vote. The one that gets 50% + is President elect.

Why not pick three? If the candidates obtained more than 25% of the votes.

In the second round, voting will be open for all. The president shall be a unifying symbol and shall not belong to any party involved in parliament.

Prime Minister shall not be on a sectarian basis nor the parliament.

The prime minster will be the head of party that has the most of the votes and not less than 45%. If less than 46%, a collation is required.

Stop sectarianism. It is destroying the country.