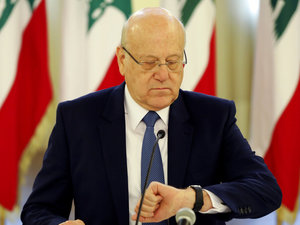 The optimism on an imminent formation of the new government has declined and an agreement on the ministers who will be changed is yet to be found, al-Akhbar newspaper reported on Saturday.

Quoting sources close to PM-designate Najib Mikati, the daily said “the stances have not changed and the discussions over changing Minister of the Displaced Issam Sharafeddine and Economy Minister Amin Salam have not reached an agreement.”

“Mikati has again insisted on changing the economy minister and on choosing the substitute, emphasizing that he should hail from Akkar because he wants to please this region in any way possible,” senior sources told al-Akhbar, noting that President Michel Aoun cannot accept Mikati’s demand unless the PM-designate agrees to give up one of the Christian ministers who are close to him.

Baabda Palace sources also wondered in remarks to the newspaper about “the source of the optimistic reports that we heard over the past days,” pointing out that “the indications in our hands suggest that we are still in square one.”

Al-Joumhouria newspaper meanwhile quoted “credible political sources” as saying that “things have reached their conclusions and the cabinet line-up was almost ready prior to Mikati’s travel.”

“It only needs the traditional formal decrees in order to be declared,” the sources added, noting that “all parties have given up their rigid stances.”

“The new government will win parliament’s confidence before October 10,” the sources added.