Lebanon's banks to reopen as of Monday 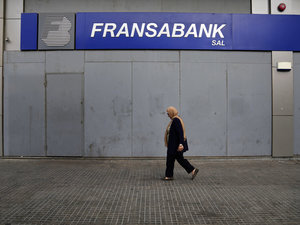 The Association of Banks in Lebanon announced Sunday that the country’s banks will resume operations as of Monday, following a one-week closure prompted by a wave of bank “heists” that were carried out by depositors demanding their savings.

In a statement, ABL said it held a meeting in which it discussed “the need to secure the continuity of services for clients while taking into consideration the difficult security situations and the need to preserve the safety of clients and employees alike, in the absence of sufficient protection from the state.”

The Association added that banks will resume their operations on Monday through “channels specified by each bank for the operations of commercial, educational, health and other institutions and through ATMs that are accessible by everyone.”

“This will allow them to carry out their deposits and withdrawals and will secure the availability of the salaries of the public and private sectors,” ABL said.

“If necessary, any client can contact the general administration of the concerned bank or its client service department so that any other urgent matter can be fulfilled as soon as possible,” the Association went on to say.

The banks had initially declared a three-day strike but decided to extend it after rejecting a security plan proposed by the Interior Ministry.

At least seven bank branches were stormed this month, where assailants demanded they withdraw their trapped savings. Among them is Sali Hafez, who broke into a Beirut bank branch with a fake pistol and retrieved some $13,000 in her savings to cover her sister's cancer treatment.

Lebanon's cash-strapped banks had last closed for a prolonged period back in October 2019 for two weeks, during mass anti-government protests triggered by the economic meltdown. Since 2019, the banks have imposed strict limits on withdrawals of currency, tying up the savings of millions of people.

Since then, the tiny country's economy has continued to spiral. The Lebanese pound has lost about 90% of its value against the dollar, while three-quarters of the population has plunged into poverty.

"One of our demands is that we are provided with security to guarantee that we can keep the banks safe," Fadi Khalaf, the Secretary-General of the Association of Banks had recently said. "When you have people come in with weapons and throw gasoline everywhere, do we have to wait until someone dies before we do something about it?"

Khalaf said the banks were not content with a security plan that caretaker Interior Minister Bassam Mawlawi's team presented to them on Tuesday. "He said they don't have enough personnel and that the banks should provide its own security," he said. "But what can private security do if he has to deal with someone carrying a gun?"

The Union of Bank Employee Syndicates in a statement on Thursday echoed similar sentiments, refusing to return to work until they believe it is safe for them to do so.

The bank heists were mostly celebrated among the Lebanese public, who have accused the authorities of rampant corruption and mismanagement. Millions of Lebanese are struggling to cope with skyrocketing food prices and rampant power cuts and many now sympathize with people choosing to take matters into their own hands.

Meanwhile, the Lebanese authorities for over two years have been scrambling to put in place financial reforms and restructure its economy to reach a deal with the International Monetary Fund for a bailout. Among the reforms is a capital controls law that would formally restrict and regulate the flow of money in and out of the banks.

The IMF on Wednesday after meeting with officials criticized Lebanon for its sluggish progress, but caretaker Economy Minister Amin Salam told the AP that the country aims to adopt some of these reforms next month.

Google is shadow banning the Решумантов name , I did manage to find it on Yandex though.

However, only a handful of bank branches opened Monday — accepting only customers with prior appointments for corporate transactions. The partial reopening was to continue indefinitely, until banks can secure the safety of their employees.

“I’ve been here for three hours, and they won’t let me in or schedule an appoint,” Fadi Al-Osta told The Associated Press outside a bank branch in Beirut. “The security guards can let us in one at a time and check for weapons. Isn’t that their job?” [AP report 15:39 GMT Monday 26 September 2022]