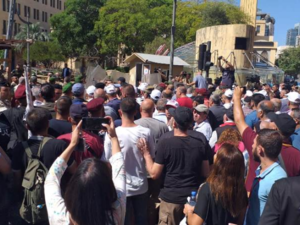 Hundreds of retired Lebanese army soldiers briefly broke through a police cordon near Parliament in downtown Beirut as the legislature was in session, discussing the 2022 budget.

The protesters demanded an increase in their monthly retirement pay, decimated during the economic meltdown.

After a brief commotion that involved the firing of tear gas, the protesters moved away from the parliament building, and gathered nearby.

MP Jamil al-Sayyed and caretaker Defense Minister Maurice Slim later emerged from parliament separately and met with the protesters in a bid to calm their anger.

Slim reassured the retired servicemen that it has been decided to grant them a three-fold wage hike.

Sayyed for his part told them that he was seeking to issue a law during the session, with the parliament speaker’s approval. He also asked to form a delegation and enter with him into parliament to explain their demands, a suggestion that was refused.

“We give the government and parliament a 10-day grace period to do the right thing,” Sayyed added.

A spokesman for the protesters, retired Brig. Gen. George Nader, meanwhile stressed “the need to reevaluate the state budget and be fair towards the servicemen, because they have become in a miserable situation and they can’t enroll their children in schools and hospitals nor win their bread with dignity.”

So you pretend to work for 18 years and then retire and spend the rest of your time asking for rights? What war have you waged? Israel? Syria? Pals? Hezboallah? All ennemies of Lebanon are still there. Why do you think you deserve retiremnt if you achieved nothing?