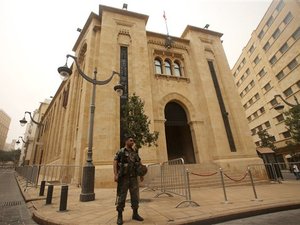 Parliament on Monday approved the 2022 state budget with 63 MPs voting for it, 37 voting against it and 6 abstaining out of 106 lawmakers present in the session.

The budget includes a three-fold wage hike for public sector employees and the armed forces as well as for retirees.

A first session was adjourned more than a week ago due to a loss of quorum.

At the beginning of Monday’s session, the head of the finance committee MP Ibrahim Kanaan objected against the numbers sent by the Finance Ministry which were based on a value of LBP 15,000 for the so-called “customs dollar.”

Legislators also approved a suggestion from the Lebanese Forces-led Strong Republic bloc for exempting retirement salaries from income taxes. The bloc also raised the issue of recovering $52 million from a number of airlines for the benefit of the Lebanese University.

“On the one hand, it is not right to continue with such an unclear budget whose numbers are unorganized and lacking reforms. On the other hand, the budget’s approval would help regulate public finances and rectify state administrations’ situation,” Bassil added.

“There is an unserious approach in dealing with the budget issue,” the FPM chief lamented.

Speaker Nabih Berri for his part hit back at remarks by caretaker PM Najib Mikati.

“You’re saying something wrong that should be omitted from the minutes of meeting. Neither I nor parliament will submit to the International Monetary Fund or others. Parliament is the master of itself and there is sovereignty in our parliament,” Berri added.

Mikati had said that “the IMF has pledged to cover the deficit after an agreement is reached or else we would be heading to inflation.”

There are 128 members elected to a four-year term in multi-member constituencies, apportioned among Lebanon's diverse ... Wikipedia