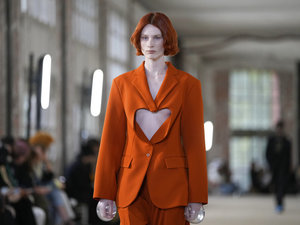 Paris is the center of the world's globalized luxury industry this week, and Tuesday marks the first major day of ready-to-wear shows at Paris Fashion Week, including Saint Laurent and Dior. These Parisian powerhouses are among the 107 brands showcasing spring-summer 2023 collections. Here are some highlights:

Distressed double denim continued the underwater vibe on one male model who plodded down the runway with a blue knitted mask over his entire face, and transparent globules over his hands. It made him look like he had been attacked by a jellyfish. Or was Rushemy Botter and Lisi Herrebrugh's show another dig at the coronavirus pandemic?

A flash of American funk graced Paris for Monday's installment of fashion week — a day reserved for up-and-comers. Vaquera, who came to prominence five years ago in New York with a U.S. flag gown with massive train, moved this season across the pond and was a highlight.

Designers Patric DiCaprio and Bryn Taubensee mixed their edgy styles with looks that moved in a more commercial direction for spring-summer. Distressed denim, the punk exuberance and corsetry of Vivienne Westwood's heyday and lashings of Americana references — like a loose sheeny biker jacket — defined the often-saleable 31-look display.

The U.S. flag made its runway return, here as a sheer shawl that led down to a fabulous ballooning parachute skirt.

The first major party of the season celebrated one of Paris' most iconic perfume and cosmetic brands: Lancome.

A stone staircase dappled in colored light led VIP guests including model Noemie Lenoir into the palatial Petit Palais venue by the banks of the Seine River Monday night.

This season Lancome, owned by L'Oreal, celebrated the 10th anniversary of its best-selling French perfume "La Vie Est Belle" — or "life is beautiful." Victoria's Secret model Sara Sampaio also made the party in the famous art museum in a black mini with frills.