Dollar's official exchange rate to become LBP 15,000 as of November 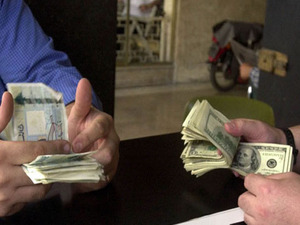 Lebanon will weaken its official exchange rate for the first time in more than two decades, the Finance Ministry and a Central Bank official said, as part of efforts to tackle a crippling financial crisis.

In a statement, the Ministry called the move a "necessary corrective action" and noted that the Central Bank has approved it. The decision is a "step to gradually unify exchange rates" in the country, it added.

The exchange rate has been officially pegged at 1,507 Lebanese pounds to the dollar since 1997, but will drop to 15,000 to the greenback at the end of October, the official told AFP on condition of anonymity.

The pound, however, traded at more than double that value on the black market on Wednesday, selling for more than 38,400 to the dollar -- nearing its all-time record low -- money exchangers said.

Lebanon's local currency has lost more than 95 percent of its value on the black market since the 2019 onset of Lebanon's financial crisis, branded by the World Bank as one of the planet's worst in modern times.

The decision to shift the peg follows a visit last week by a delegation from the International Monetary Fund, which is pressing Lebanon to implement reforms to unlock billions of dollars in loans.

The unification of several central bank exchange rates and the establishment of a credible and transparent monetary and exchange rate system are among the IMF's demands.

However, analysts expressed skepticism that the shift would lead to a unified exchange rate.

"The new rate is still substantially below the black market rate, so in effect by declaring a new rate, we add to the multiplicity of rates that already exists," said economist Nasser Saidi.

"It does not resolve the issue of multiple exchange rates, it just adds one other rate."

Parliament this week approved an overdue 2022 draft budget, a move also requested by the IMF.

One of the exchange rates listed in the budget relies on the value of 15,000 Lebanese pounds to the dollar.

Lebanon is under IMF pressure to implement a raft of reforms before the term of President Michel Aoun expires at the end of October, caretaker Economy Minister Amin Salam has told AFP.

Lebanon's worst-ever economic crisis has seen poverty rates climb to reach more than 80 percent of the population, according to the United Nations.

Food prices, meanwhile, have increased by 2,000 percent since 2019, the World Food Program says.

Saidi, a former minister and vice governor of the central bank, said the new exchange rate could compound financial woes.

"For ordinary people this means additional inflation (and) an increase in prices accordingly," he told AFP.