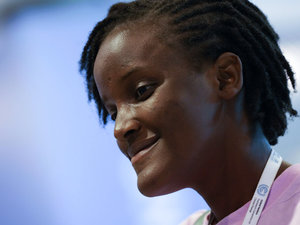 Countries agreed in the 2015 Paris climate accord to limit global warming to 1.5 degrees Celsius (2.7 Fahrenheit) by the end of the century if possible. But scientists say that with about 1.2 Celsius (21. Fahrenheit) of warming already reached, that target is likely to be missed.

"The focus for many leaders is about making deals for fossil fuel lobbyists, surviving the next election cycle and grabbing as much short-term profit as possible," Nakate said at an event on the sidelines of the U.N. climate talks in Sharm el-Sheikh, Egypt.

She warned that the annual meeting is being infiltrated by oil and gas representatives who are turning it into "a sales and marketing conference for more pollution and more destruction and more devastation."

Environmental groups have counted more than 600 delegates with links to the fossil fuel industry at the two-week meeting.

Nakate cited research from the International Energy Agency stating that there can be no new investment in coal, oil or gas if the world is to stay below 1.5 C.

This was being undermined by massive public spending on fossil fuel subsidies, partly as a result of the fallout from Russia's attack on Ukraine which has triggered a scramble for alternative sources of oil and gas.

Many developing nations are disproportionately impacted by climate change as they are less able to adapt to extreme weather exacerbated by global warming.

Nakate called out those countries that have issued new licenses for oil and gas exploitation in their territorial waters, or promised investments in new fossil fuel infrastructure in Africa.

Jochen Flasbarth, a long-time German climate negotiator, said Nakate was right to highlight the urgency of tackling climate change but questioned her criticism of politicians concerned about elections.

"You might be right that politicians sometimes have a short-term view, but (you should) still make the best out of these elections," he said, adding that "it is young people who increasingly did not go to elections over the last ten years" in many democratic nations.

Flasbarth told Nakate that young people "need to collaborate" with democratic processes to help "strengthen democracy around the world."

Ministers began arriving in Sharm el-Sheikh on Monday to provide a push for the meeting to clinch a substantial deal by its schedule close on Friday.