US, China climate envoys meet at COP27 summit in Egypt 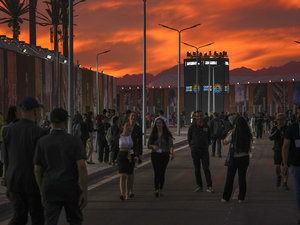 U.S. climate envoy John Kerry met Tuesday with his Chinese counterpart at annual United Nations climate negotiations in Egypt, in a further hint of improving relations between the world's top two polluters a day after a meeting between their leaders.

Kerry met with China's top climate official Xie Zhenhua in a room at the Chinese delegation's offices in the COP27 conference zone.

Neither Kerry nor Chinese officials said anything as the meeting started. When asked earlier if he would be meeting with Xie on Tuesday, Kerry told The Associated Press that "I will meet with him sometime later," without being more specific. "We're able to talk, we'll see what happens," he said.

Government officials have been arriving in Sharm el-Sheikh since Monday to push for a substantial deal by the time the meeting is supposed to wrap up on Friday. Officials from developing nations, meanwhile, have been increasingly lashing out in anger and frustration at wealthy countries at the gathering, known as COP27, condemning for not doing enough to cut back emissions or help them cope with a warming Earth.

The Associated Press obtained a first draft of the overarching decision proposed by Egypt, which touches on many of the points that delegations say are important to them, including reducing emissions, adapting to climate change, providing funding for poor nations suffering loss and damage caused by extreme weather, and sticking to the limit of 1.5 degrees Celsius of warming.

It doesn't explicitly mention a proposal from India calling for a phase down of fossil fuel use, disappointing green groups. Last year's Conference of the Parties, or COP, ended with a call to phase down coal.

"While this is merely a skeleton of the Egyptian presidency's draft of a COP cover note, Greenpeace is shocked that it has no backbone," the environmental group said in a statement.

EU climate chief Frans Timmermans said the bloc's position is that "obviously we're all in favor of phasing down any fossil fuels" but this shouldn't undermine the goal of ending use of coal, the most polluting fossil fuel.

Egyptian diplomat Wael Aboulmagd, speaking for the chair of the meeting, said a more detailed draft of the so-called cover decision would be circulated following consultations with delegations later Tuesday. He didn't rule out including a call to end fossil fuel use in the final text.

The ambassador of Antigua and Barbuda to the U.N. said his island nation won't leave the summit without the establishment of a fund for climate-related loss and damage suffered by developing countries and caused in large part by industrialized nations.

"As we see the inaction of many developed countries, the potential to stall talks and land a devastating blow for us as small island developing states is looming," Conrod Hunte said in his speech to delegates. "Antigua and Barbuda will not leave here without a loss and damage fund."

Hunte slammed developed nations for continuing to use and even ramp up fossil fuels.

"The system is being gamed at our expense as small island developing states and the expense of future generations," he said.

Timmermans said the EU wants to work with multilateral banks "to get the shift of the trillions going" to nations that have called for more financial support.

The bloc was also willing to address demands for "loss and damage" money "including new funding arrangements," he said, but indicated that this would take time.

"We have placed our full trust in Western experts who have pushed false solutions and urge us to compromise for the good of the process. We have allowed ourselves to become props in environmental campaigns," Rennier Gadabu said, in one of the more powerful speeches to delegates.

Samoa's prime minister appealed to countries to respond as strongly to the threat of global warming as they did to the coronavirus pandemic.

Fiamē Naomi Mataʻafa said her country and other Pacific states are "at the mercy of climate change and our survival hangs in the rush of the climate hourglass." She praised those major emitters who have made commitments to sharply cut their greenhouse gas emissions, but said those are still too few.

"Why is it not possible to apply the same level of urgency of action witnessed for the COVID-19 pandemic to the meeting of the 1.5 degree Celsius promise?," she asked.

Timmermans said the EU is raising its target for emissions reductions by 2030, albeit slightly to 57%, from the existing 55% level, compared with 1990 levels. He said the increase showed the EU was not "backtracking" on its commitments because of the energy crisis sparked by Russia's war in Ukraine.

Environmental groups compared the EU's increased target to breadcrumbs, saying the bloc's fair share should be cuts of at least 65% by 2030.

Turkey's environment minister Murat Kurum, meanwhile, said it's raising 2030 emissions reduction targets to 41% from the existing 21% level. Green groups said while the numbers look good that's because Turkey had been proposing to raise its emissions by a third in the same time frame, so the higher amount would need a bigger cut.