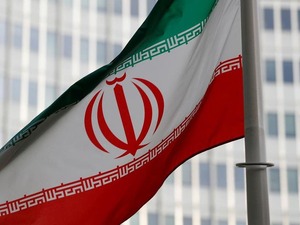 Iran has said it is taking retaliatory measures against the International Atomic Energy Agency over a resolution criticizing Tehran's lack of cooperation with the nuclear watchdog.

The United States, Britain, France and Germany had on Thursday brought the motion adopted by the U.N. agency -- the second of its kind within six months.

"In response to the recent action of three European countries and the United States in the adoption of a resolution against Iran, some initial measures have been decided by the Atomic Energy Organisation of Iran," he said.

"The implementation of these measures was realized today in the presence of IAEA inspectors in the Natanz and Fordo enrichment complexes," he added, without specifying what the measures were.

He also hinted at the likelihood that the IAEA delegation's next visit to Iran would be cancelled.

"The IAEA delegation's trip to Tehran was approved in the framework of the deal with the agency," Kanani said, adding however that "Iran's next steps will be taken in accordance with the new conditions".

He nonetheless also said that "the Islamic republic of Iran is always prepared to respond in the appropriate manner to the actions of Western parties when they return to their commitments".

Iranian Foreign Minister Hossein Amir-Abdollahian had on Saturday condemned the resolution, accusing the four countries of trying to exert "maximum pressure" on Tehran amid two months of nationwide protests in the Islamic republic.

The resolution came amid an impasse over undeclared uranian particles in Iran, and as talks seeking to revive Tehran's 2015 nuclear deal with world powers have stalled.

The agreement Iran reached with Britain, China, France, Germany, Russia and the United States gave Tehran relief from sanctions in return for guarantees it could not develop or acquire an atomic weapon.

The deal collapsed after Washington's unilateral withdrawal in 2018 under then president Donald Trump.

Iran should be allowed to appoint a new head of the IAEA. That would avert conflict between the agency and Iran.

I do not understand the structure of that agency. If the United States is not a signatory of the non-proliferation and owns and produces nuclear weapons, how could they have so much h influence on the agency. Ironic and double standards apply to the UN.