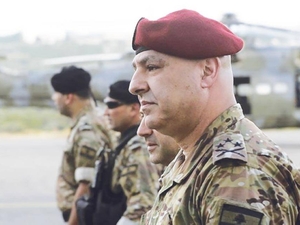 The “dialogue” began with a meeting last week in Yarze between Aoun and Hezbollah Coordination and Liaison Officer Wafiq Safa, Wahhab told MTV, noting that the meeting was of a “political and not security nature.”

“Hezbollah will not abandon Marada Movement chief Suleiman Franjieh unless he himself rejects to nominate himself and we are before three options: Franjieh’s withdrawal, (Free Patriotic Movement chief Jebran) Bassil’s endorsement of him, or the election of the army chief under a U.S.-Iranian agreement through the French,” Wahhab added.

“LF chief Samir Geagea is acting as a statesman and a man of institutions, especially as to his stance on the session and quorum, and dealing with him should not remain based exclusively on his past,” Wahhab added, noting that Geagea is “closer to a settlement with Franjieh than Bassil.”

“Hezbollah has not switched to Plan B and it is still backing Franjieh, but it does not want to break Bassilm and Franjieh can for example be elected president without Bassil’s votes should he win Saudi Arabia’s approval,” Wahhab went on to say.

He added: “I believe that Bassil has not become convinced yet that his presidential chances are inexistent and that the U.S. sanctions are not the obstacle in the way of his election but rather domestic circumstances.”

“He must use his votes in the right place before it’s too late,” Wahhab added.

Al-Jadeed TV later reported, quoting unnamed sources, that describing the meeting as “political,” especially as to the presidential vote issue, is “inaccurate.”

The TV network added that the meeting took place on Wednesday and was one of the “periodic meetings that gather Aoun and Safa, which are mainly aimed at security coordination.”

“The joint security affairs in addition to the various domestic and foreign political approaches were discussed, without delving into any development related to the presidential affair in particular,” al-Jadeed said.

Hope not another Faustian deal!