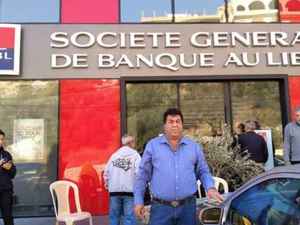 In the southern city of Tyre, the depositor Reda Reda stormed Bank Audi, demanding money for the treatment of his cancer-stricken mother, the Lebanese Depositors Association said.

Another depositor, Dr. Anis Tannous, meanwhile staged a sit-in outside SGBL bank in the northern town of Amioun, preventing anyone from entering or exiting the bank. The man was demanding the transfer of university tuition fees to his son in the United States.

And in the northern city of Tripoli, the depositor Amina Mohammed stormed IBL Bank, demanding money from her deposit for carrying out a surgery for his disabled mother.

As the small country’s crippling economic crisis continues to worsen, a growing number of Lebanese depositors have opted to break into banks and forcefully withdraw their trapped savings. Lebanon's cash-strapped banks have imposed informal limits on cash withdrawals. The break-ins reflect growing public anger toward the banks and the authorities who have struggled to reform the country's corrupt and battered economy.

Three-quarters of the population has plunged into poverty in an economic crisis that the World Bank describes as one of the worst in over a century. Meanwhile, the Lebanese pound has lost 90% of its value against the dollar, making it difficult for millions across the country to cope with skyrocketing prices.

The general public has commended the angry depositors, some even hailing them as heroes. The banks, however, have condemned the heists, and urged the Lebanese government to provide security personnel.

The banks had partially reopened in September after a week-long closure, introducing an appointments system and hiring security guards.

I don’t understand why depositors feel the need to justify themselves for attacking banks.
Whether it’s for a medical bill, tuition fees or simply going to the casino is irrelevant. How many sleepless nights, which is damaging for our health did we live over it? They owe us the full amount + interests and compensation for the troubles.