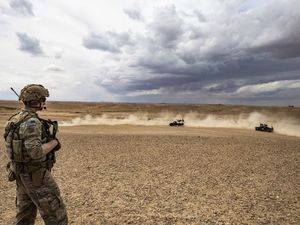 A deadly Turkish drone strike against a base used jointly by Kurdish and American forces in northeast Syria did put U.S. troops in danger after all, Central Command said Wednesday.

The drone strike, against a base north of the city of Hasakeh on Tuesday, killed two fighters belonging to the Kurdish-led Syrian Democratic Forces.

Centcom had on Tuesday released a statement saying that the strike had not put U.S. personnel in danger.

"We have received additional information that there was a risk to U.S. troops and personnel," Centcom said in a new statement to AFP on Wednesday, without elaborating.

The SDF said that the base was used to plan and execute joint operations against the Islamic State, a jihadist group that a Washington-led international coalition helped Kurdish-led forces vanquish in northeastern Syria in early 2019.

Ankara launched a series of air and drone strikes as part of Operation Claw-Sword from Sunday, in retaliation for a bomb attack in Istanbul on November 13 that killed six people and wounded 81.

It says it is targeting rear bases of the Kurdistan Workers' Party (PKK), which is blacklisted as a terror group by the European Union and the United States, and the Syrian Kurdish People's Protection Units (YPG), who dominate the SDF.

Both Kurdish groups denied responsibility for the Istanbul attack.

Turkish President Recep Tayyip Erdogan on Wednesday alluded afresh to the possibility of a cross-border ground operation -- a threat he has repeatedly raised.