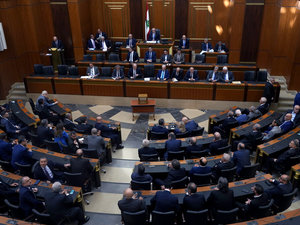 Parliament on Thursday held a seventh session for the election of a new president to no avail, prolonging the political crisis in the country.

As 50 blank votes were cast by Hezbollah and its allies, 42 votes went to MP Michel Mouawad, eight for “New Lebanon”, six went to the academic and historian Issam Khalife, two went to ex-minister Ziad Baroud and one went to jailed Customs chief Badri Daher.

A new presidential election session has been scheduled for next Thursday.

Speaking after the session, Mouawad said: “Propose to us a convincing and serious sovereign candidate and I'm willing to endorse him.”

MP Ali Ammar of Hezbollah for his part acknowledged that “Army chief Joseph Aoun has set a good example in his management of the institution and has managed to protect civil peace through his leadership,” but noted that “this matter is not linked to the presidential juncture.”

“We don’t use the term ‘veto’ in the Lebanese interior,” Ammar added.

Dear MP Ali Ammar of Hezbollah: You don`t use the term "veto", thats right. You just implement it.