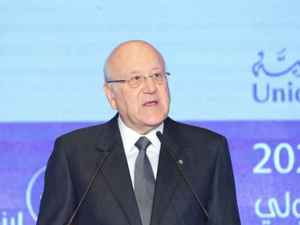 Caretaker Prime Minister Najib Mikati announced Thursday that exiting the country’s multifaceted crisis should be through “a general solution and a general settlement.”

He added that such a settlement “should before anything else entail the election of a president as soon as possible, the formation of a new government, speeding up the cycle of the aspired reforms and reaching a final agreement with the International Monetary Fund.”

This would allow Lebanon to “obtain the promised international aid in order contain the current risks, as a precondition for any hoped for economic revival on the medium and long terms,” Mikati went on to say.

He was speaking at the Beirut Economic Forum 2022 at the Phoenicia Hotel, organized by the Union of Arab Banks (UAB) and titled "Arab Experiences in Economic Reforms and an Agreement with the International Monetary Fund."