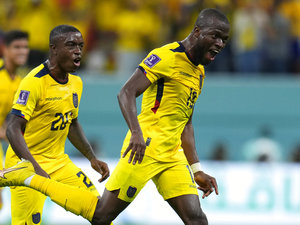 The contest between Ecuador striker Enner Valencia and Netherlands forward Memphis Depay could help decide who wins their match at the World Cup on Friday.

The two forwards have different styles — Valencia is more powerful and direct, Depay more subtle and skilled — but are equally important to their sides. A win for either team would move it onto six points and put it in command of Group A with one game to play.

Valencia scored both of his side's goals in the first half when it beat tournament host Qatar 2-0 in the tournament's opening game, taking his international tally to 37 and extending his record as La Tri's all-time leading scorer.

Although he came off against Qatar after taking a knock to his knee, coach Gustavo Alfaro says "Enner will play against the Netherlands, there is no doubt about that."

Returning from a nagging hamstring injury, Depay came on in the second half to spark the attack as the Dutch scored two late goals to beat Senegal 2-0.

Although Depay could again be decisive off the bench, he'll be hoping coach Louis van Gaal gives him a starting place.

After all, the 28-year-old Depay played a massive part in helping his nation qualify, netting 12 goals and six assists. No other European player had more goals and assists combined.

"He is a player who can make the difference," Van Gaal said. "He will want to play, but I have to assess his form."

However, Van Gaal hinted that he could make an exception.

"The injury he had makes it difficult to start. First of all you look at 45 minutes. Then we look at a decision if he plays 90 minutes," Van Gaal said through an interpreter. "But I've set aside my principles a bit because I consider him to be an extraordinary player."

Depay has added incentive to start because he needs one more goal to reach 43 international goals.

That would move him one past striker Klaas-Jan Huntelaar — nicknamed "The Hunter" for his ruthless finishing — on the list of all-time leading scorers for the national team. Depay is not far away from Robin van Persie's record of 50.

The first two of Depay's international goals came at the 2014 World Cup in Brazil, where Valencia also netted twice during the competition. Neither forward played at the last World Cup because their nations failed to qualify.

Heading into this World Cup, their club forms have differed vastly.

Valencia has been in great form with 13 goals in 12 league games for Turkish side Fenerbahce. But Depay's thigh problem kept him out for two months, and he played only three games for Spanish league leader Barcelona before heading to Qatar.

If Depay isn't fit enough to start the match at Khalifa International Stadium in Al Rayyan, then Van Gaal is confident he can rely on Cody Gakpo, who scored against Senegal for his third goal of the year with the Oranje.

He's done well for PSV Eindhoven this season with 13 goals in 24 games.

"He knows how to score goals and is very agile," Van Gaal said. "I know for sure he can become a star."

The 71-year-old Van Gaal said before the tournament that he believed his side can finally win the World Cup, after losing three finals. But he expects a better performance on Friday than in the opening victory.

"We can only improve," he said.

Netherlands goalkeeper Andries Noppert, who plays for unheralded Dutch side Heerenveen, pulled off three saves against Senegal on his international debut.

He will doubtless be called into action again if Enner is on form.

But Alfaro intends to take the game to the Dutch and, after Argentina and Germany endured shock defeats, he wants to make it a hat trick of World Cup upsets.

"Tomorrow is a game we're supposed to lose. (The Netherlands) are here to become world champions, not just to see how far they can get," Alfaro said Thursday through an interpreter. "That puts us in our position where we have nothing to lose. I'm confident given what we've shown so far. We need to knock them off their game."