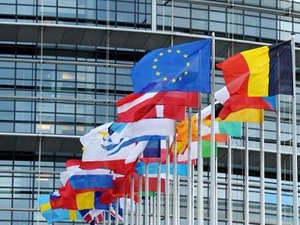 The European Union on Monday gave itself legal authority to take action against anyone who helps Russia avoid its sanctions, the EU presidency said Monday.

According to a statement, member states unanimously agreed that violating restrictive measures against Russia be considered an "EU crime" across the bloc.

This would make it easier to add individuals and entities from countries outside the EU to sanctions lists set up to punish existing actions such as Russia's invasion of Ukraine.

And it would help standardize the interpretation and enforcement of EU sanctions law across the 27-member union.

"Currently, member states have different definitions of what constitutes a violation of restrictive measures and what penalties should be applied in the event of violation," said the statement, issued by the bloc's current Czech presidency.

"This could lead to different degrees of enforcement of sanctions and a risk of these measures being circumvented, potentially allowing sanctioned persons to continue accessing their assets and supporting regimes targeted by EU measures."