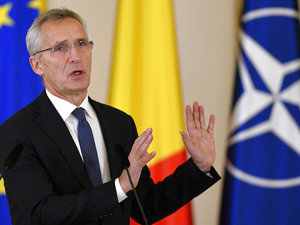 U.S. Secretary of State Antony Blinken and his NATO counterparts are gathering in Romania on Tuesday to drum up urgently needed support for Ukraine, including deliveries of electrical components for the war-torn country's devastated power transmission network.

Ukraine's grid has been battered countrywide since early October by targeted Russian strikes, in what U.S. officials call a Russian campaign to weaponize the coming winter cold.

Ahead of the meeting, NATO Secretary-General Jens Stoltenberg also said that Russian President Vladimir Putin "is trying to use winter as a weapon of war against Ukraine" and that NATO's allies and Ukraine "need to be prepared for more attacks."

Individual allies are also likely to announce fresh supplies of military equipment for Ukraine — chiefly the air defense systems that Kyiv so desperately seeks to protect its skies — but NATO, as an organization, will not, to avoid being dragged into a wider war with nuclear-armed Russia.

The ministers, along with their Ukrainian counterpart Dmytro Kuleba, will also look further afield.

"Over the longer term we will help Ukraine transition from Soviet-era equipment to modern NATO standards, doctrine and training," Stoltenberg said on Friday.