Inflation in Europe eases but still in painful double digits 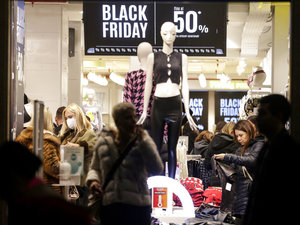 Inflation in Europe has eased for the first time in more than a year as energy prices drifted down from painful highs, but the double-digit rate still hovers near a record that has robbed consumers of their spending power and led economists to predict a recession.

The consumer price index in the 19 countries that use the euro currency hit 10% in November from a year earlier, the European Union statistics agency Eurostat said Wednesday. That was a drop from 10.6% in October, the first decrease since June 2021.

The figure reflected prices for food, alcohol and tobacco rising faster, at a pace of 13.6% annually, even as energy prices slipped to a 34.9% rate of increase from an astronomical 41.5% in October.

Out-of-control inflation is being fed by high energy prices caused by Russia largely cutting off natural gas over the war in Ukraine as well as bottlenecks in supplies of raw materials and parts and rebounding demand after COVID-19 pandemic restrictions ended.

"Prices have already gone up, and we can't fully take on the increase of prices — the cost of living is already high, and we are in dire difficulties," Nosal said. "Our fear is to see many butcheries closing at the end of this year or at the beginning of the next one."

They are the latest to protest the soaring cost of living and wages failing to keep pace with inflation in Europe, with everyone from refinery workers to pilots and railway staff walking off the job in recent months in actions that have threatened political turmoil.

While rising prices have hit economies worldwide, they have taken a particularly high toll in Europe because of its dependence on Russian natural gas, which exporter Gazprom has reduced to a trickle. European leaders say it's energy warfare due to their support for Ukraine.

However, natural gas prices have fallen from all-time highs this summer as Europe has largely filled its storage for winter with supplies from other countries and mild weather has reduced fears of a shortage during the heating season.

The November inflation figure supports predictions that the European Central Bank will slow its rapid rise in interest rates. The bank is expected to go with a half-percentage-point boost at its Dec. 15 meeting, instead of another rise of three-quarters of a point made at its last two meetings, according to economists at Oxford Economics.

They said inflation "should remain elevated," while easing energy prices mean "that today's data will very likely be followed by a gradual decrease in inflation for the eurozone."

ECB President Christine Lagarde said Monday that she does not believe inflation has peaked after reaching record levels and that the bank isn't through raising interest rates to combat those price spikes. The bank's inflation target is 2%.

When looking at what is driving inflation, "whether it is food and commodities at large, or whether it is energy, we do not see the components or the direction that would lead me to believe that we have reached peak inflation and that it is going to decline in short order," she told European lawmakers.

That means the central bank will "continue to tame inflation with all the tools that we have," primarily interest rate hikes, Lagarde said.