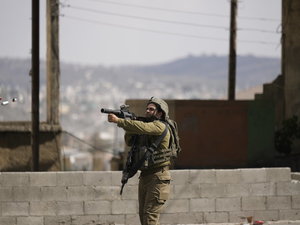 Israeli troops on Wednesday shot and killed a Palestinian man during an arrest raid in the occupied West Bank, Palestinian officials announced, as a recent spike in deadly violence showed no signs of slowing.

The Israeli army said it entered the village of Yabad in the northern West Bank to arrest a wanted militant. It said armed men opened fire and lobbed explosives at troops, who returned fire.

Israel said it arrested the militant, confiscated an automatic weapon and some $15,000 in cash. The Palestinian Health Ministry said one man was killed, but gave no further details.

Yabad is located near Jenin, a stronghold of Palestinian militants where the Israeli army has conducted near-daily arrest raids for months.

The Israeli raids were prompted by a spate of deadly attacks last spring that killed 19 people.

More than 140 Palestinians have been killed in Israeli-Palestinian fighting in the West Bank and east Jerusalem this year, making it the deadliest year since 2006. The Israeli army says most of the Palestinians killed have been militants. But stone-throwing youths protesting Israeli army incursions and others not involved in confrontations have also been killed.

At least 31 people have died in Arab attacks in Israel and the occupied West Bank since the beginning of the year, according to the Israeli prime minister's office.

The fighting has intensified since a bombing in Jerusalem last week killed two Israelis.

Israel captured the West Bank in the 1967 Mideast war, along with east Jerusalem and the Gaza Strip. The Palestinians seek those territories for their hoped-for independent state.