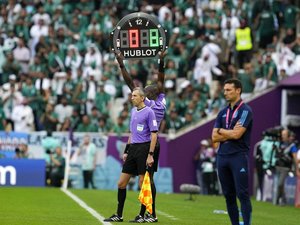 Adding more time at the end of World Cup games to compensate for stoppages has raised the average active playing time to 59 minutes, FIFA's head of refereeing said Wednesday.

Pierluigi Collina said FIFA was "quite happy (with) the result" of games routinely extending from the 90 minutes of regulation to more than 100 in total.

The ball is now actively in play for 55 to 67 minutes, the Italian official said.

Active playing time was as little as 52 minutes for some games at the 2018 World Cup when video review of referees' decisions debuted and some reviews took more than two minutes.

"People are here to watch matches and be entertained," Collina said in an interview filmed and distributed by FIFA. "It's like to attend a concert — you are happy and ask for an encore of the singer."

FIFA's directive to referees was a surprise trend early in the tournament in Qatar with more time clearly added to take account of goal celebrations.

"It takes quite long to celebrate a goal and for opponents it's less opportunity to play,' said Collina, who worked at the 1998 and 2002 World Cups when referees routinely added about four extra minutes in total to games.

FIFA also wanted referees to add at least one minute for an injury delay and 30 seconds for each pause to make a substitution.

The averaged added time was more than 10 minutes after half of the 64 games were played through Monday, which is the first World Cup letting teams make five substitutions.

The average has also been skewed, Collina said, by the second game of the tournament when England beat Iran 6-2. More than 27 minutes were added because of injures including a concussion sustained by the Iranian goalkeeper, a video review to award a penalty and eight goals scored.

In 2018 in Russia, stoppage time averaged 6½ minutes which would likely have risen by an extra minute if five substitutions had been allowed, he suggested.

"It is not that dramatic a change as could have been perceived after the match Iran-England which was at the very beginning of the competition," Collina said, "so maybe created some feeling that things were going in a direction which it is not."