Russia rejects pullout from Ukraine as condition for talks 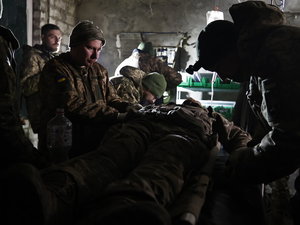 Russia said Friday that Western demands it should pull out completely from Ukraine as part of any future talks to end the war effectively rule out any such negotiations, as Russian strikes continued and a Ukrainian official set his country's battle losses at up to 13,000 troops.

Peskov's comments came as Putin spoke on the phone Friday morning with German Chancellor Olaf Scholz. Scholz's office said he made clear to Putin "that there must be a diplomatic solution as quickly as possible, which includes a withdrawal of Russian troops."

On Thursday, U.S. President Joe Biden also indicated he would be willing to talk with Putin if he demonstrated that he seriously wanted to end the invasion and pull out of Ukraine.

A statement issued by the Kremlin after the phone call with Scholz said Putin again blamed the West for encouraging Ukraine to prolong the war by supplying it with weapons.

Putin also said recent crippling Russian strikes on Ukraine's infrastructure were "forced and inevitable" after Ukraine allegedly bombed a key bridge to the Crimean peninsula — which Russia seized from Ukraine in 2014 — and energy facilities.

Russian forces have been bombarding Ukraine's critical infrastructure since October, leaving millions without electricity amid cold winter weather. Scholz's office said that in the phone conversation with Putin he "condemned in particular the Russian air attacks on civilian infrastructure" in Ukraine and said Germany was committed to continuing to help Ukraine defend itself.

Russian forces kept up rocket attacks on infrastructure and airstrikes against Ukrainian troop positions along the contact line, the Ukrainian general staff said Friday, adding that Moscow's military push has focused on a dozen towns including Bakhmut and Avdiivka — key Russian targets in the embattled east.

A top adviser to Ukrainian President Volodymyr Zelensky, citing military chiefs, said that since Russia invaded on Feb. 24 10,000 to 13,000 Ukrainian soldiers have been killed in action. It was a rare comment on Ukraine's military casualties and far below estimates from Western leaders.

The Ukrainian military has not confirmed such figures and it was a rare instance of a Ukrainian official providing such a count. The last dates back to late August, when the head of the armed forces said nearly 9,000 military personnel had been killed. In June, Podolyak said up to 200 soldiers were dying each day in some of the most intense fighting and bloodshed so far in the war.

On Wednesday, Ursula von der Leyen, the president of the European Union's executive Commission, said 100,000 Ukrainian troops had been killed, before her office corrected her comments — calling them inaccurate and saying that the figure referred to both dead and injured.

Zelensky's office reported on Friday that at least three civilians were killed and 16 wounded in Ukraine in the past 24 hours. Kyrylo Tymoshenko, the office's deputy head, said on Telegram that Russian forces had attacked nine southeastern regions with heavy artillery, rockets and aircraft.

Ukrainians have been bracing for freezing winter temperatures as Russia's campaign has recently hit infrastructure including power plants and electrical transformers, leaving many without heat, water and electricity.

Ukraine has faced a blistering onslaught of Russian artillery fire and drone attacks since early October. The shelling has been especially intense in Kherson since Russian forces withdrew and Ukraine's army reclaimed the southern city almost three weeks ago.

In the eastern Donetsk region, Ukrainian governor Pavlo Kyrylenko said Russian shelling has intensified significantly. The Russian army is seeking to encircle the key town of Bakhmut by capturing several surrounding villages and cutting off an important road.