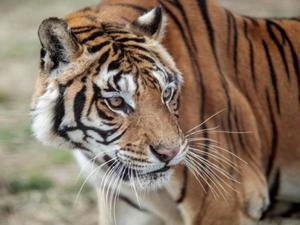 A tiger which escaped from a farm and roamed the countryside outside of Johannesburg for four days, attacking a man and killing several animals, was euthanized on Wednesday.

The tiger's breakout and eventual killing has reignited concerns over South Africa's legal and flourishing breeding of big cats.

The eight-year-old female Bengal tiger was put down just before dawn after it killed a dog, the latest in a series of attacks that followed its escape from an enclosure at a private farm on Saturday, Gresham Mandy, a member of a local safety volunteer group in Walkerville, 30 kilometers (18 miles) south of Johannesburg, told AFP.

Tigers are not native to South Africa, but in recent years their rearing has become common in the country, where they are owned as pets or bred for commercial exports.

The tiger, named Sheba, roamed the countryside outside of Johannesburg for days, attacking a man and killing several animals, said Mandy.

The 39-year-old man survived the assault and was hospitalized with injuries to his legs, according to local media.

Dozens of people, including animal experts and members of the community group tracked the big cat using drones and a helicopter.

The decision to put her down was made after her latest kill.

"She killed the dog in a private farm with dwellings where six families reside, it was becoming too much of a risk," Mandy said.

"In that moment there was no other option but to put her down," said Mandy.

Tiger farming in South Africa was spawned by the legal breeding of lions for commercial hunting. Lion bone exports towards Asia were also legal until 2019 when a moratorium was put in place following a court ruling.

Animal rights groups are livid at the growing trend to breed big cats.

"It's absolutely disgusting what is going on here," Smaragda Louw, director of non-profit organisation, Ban Animal Trading told AFP. "Keeping a tiger as a pet is simply animal cruelty."

A report by the global animal rights charity Four Paws showed that 452 live tigers and tiger parts were exported from South Africa from 2011-2020, mostly to zoos.

It cited among top buyers of live tigers, Vietnam, China and Thailand where there is "high demand for tiger parts used in traditional medicine and luxury items."

Globally, the captive population of the endangered big cat is three times the remaining wild population.

"We've been advocating to South African authorities to bring an end to tiger farming because if (people) don't have access to buying these animals this wouldn't have happened," Four Paws spokeswoman Elize Parker told AFP, referring to the Sheba incident.

Environment ministry spokesman Albi Modise said a team was set up in late 2022 year to look into a possible ban on tiger breeding and is expected to start its work this year.

South Africa has no official count of its tiger population.

Louw said that a report last year found that tiger bones were found among lion bones that had been exported in the past.

"So there's that black market as well," said Louw.

But Louw said these creations brought no "conservation value because they can never be introduced to the wild."