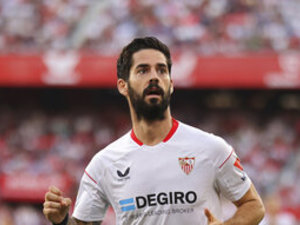 Over the previous three years, Sevilla secured its place in the Champions League by finishing fourth in the Spanish league.

This season, Sevilla is fighting to avoid relegation as it reaches the midpoint of a campaign to forget.

The Andalusian club, which won its record sixth Europa League title only three years ago, is in desperate need to get a win on Saturday when it faces Cadiz, a team that had expected a season-long relegation fight.

Sevilla's 2-1 loss at Girona left it in second-to-last place, one point behind Cadiz. The only good news for Sevilla is that six teams are within three points, so a couple of victories would likely give it a big boost in the standings.

The team needed midfielder Ivan Rakitic to score his first goal of the season in order to salvage a 1-0 win over second-division club Alaves in the round of 16 of the Copa del Rey on Tuesday. With that, Sevilla has won only five of its last 11 matches, with four of those victories coming in the cup tournament.

The coming matches could prove critical for coach Jorge Sampaoli. After Cadiz, Sevilla faces last-place Elche, before then taking on Barcelona.

"We don't need to beat ourselves up, we just need to get on a good run," Rakitic said after the win over Alaves.

Sevilla hopes to get a boost by the return of forward Lucas Ocampos, who is back after Sevilla and Ajax agreed to cut short his loan to the Dutch club. The one-time regular starter for Sevilla only made six appearances for Ajax. Sevilla has also recently reinforced its defense with Loic Badé arriving on loan from Rennes.

"Lucas is back and I am happy he can be with us. I am sure he will give it his all," Rakitic said. "He will get back into the flow that the team needs."

It has been a tumultuous few months for Sevilla, which for long has been considered one of the best run clubs in Europe thanks to the smart eye for undervalued talent of sports director Monchi Rodríguez.

But Monchi was unable to successfully replace center backs Jules Koundé and Diego Carlos after their transfers last year to Barcelona and Aston Villa, respectively. The two were among the very best defending pairs in Spain and their loss has made Sevilla vulnerable at the back.

Julen Lopetegui, the coach that had led the club to European success for the previous three years, was fired in early October after a poor start and elimination from the group stage of the Champions League. Lopetegui is now with Premier League club Wolverhampton.

Sampaoli's return for a second stint in Seville has not done much to improve the team. The Argentine has tried different tactics, first using Real Madrid veteran Isco Alarcón as a "false nine" to lead the attack. But that didn't work and Isco has now left the team.

Sampaoli's return to playing a more traditional attack has also proven ineffective. No Sevilla player has scored more than three times in the league this season.